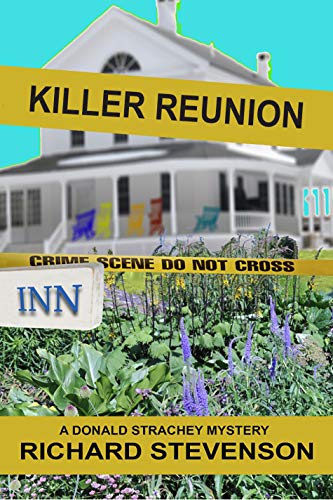 Ep:045 Born 1938 Lock Haven, PA, Richard Stevenson graduated Lock Haven State College, did graduate work in American lit at Penn State.  He joined the Peace Corps and fled grad school to teach English in Ethiopia 1962-64---He says it's the best thing he ever did. Worked as Peace Corps program evaluator around the world 1964-67.  Ran the anti-poverty program in Pittsfield, MA, 1968-71.  Free-lance writer after that.  Wrote for magazines and newspapers, including 15 years as an editorial writer at The Berkshire Eagle, Pittsfield, MA.  Won New England AP Press Association award for editorials on gay marriage.  Wrote a thriller, GRAND SCAM (Dial, 1979) with Peter Stein.  Wrote the 16 Strachey books under the name Richard Stevenson, starting with DEATH TRICK in 1981.  Four of them filmed by HereTV.  He has been reviewing books regularly for The Washington Post for many years and continues to do so.

He has two children, both excellent human beings now in their forties, one a teacher, one a writer and musician.  He's been with Joe Wheaton, sculptor and video artist since 1990.  Married since the first day it was legal in MA in 2004.