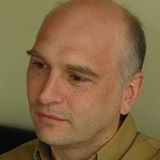 Ep:048 Born to Dutch parents and raised in Colombia and England, Oilvier Bosman is a rootless wanderer with itchy feet. He’s spent the last few years living and working in The Netherlands, Czech Republic, Sudan and Bulgaria, and has every confidence he will now finally be able to settle down among the olive groves of Andalucia.

He’s an avid reader and film fan (in fact, his study is overflowing with his various dvd collections!)

Olivier did an MA in creative writing for film and television at the University of Sheffield.  After a failed attempt at making a career as a screenwriter, he turned to the theater and wrote and produced a play called ´Death Takes a Lover´ (which has since been turned into the first D.S.Billings Victorian Mystery). The play was performed on the London Fringe to great critical acclaim.

He currently lives in Spain where he makes ends meet by teaching English.

The Mystery of the Garish Garage by Jeffrey Sacks